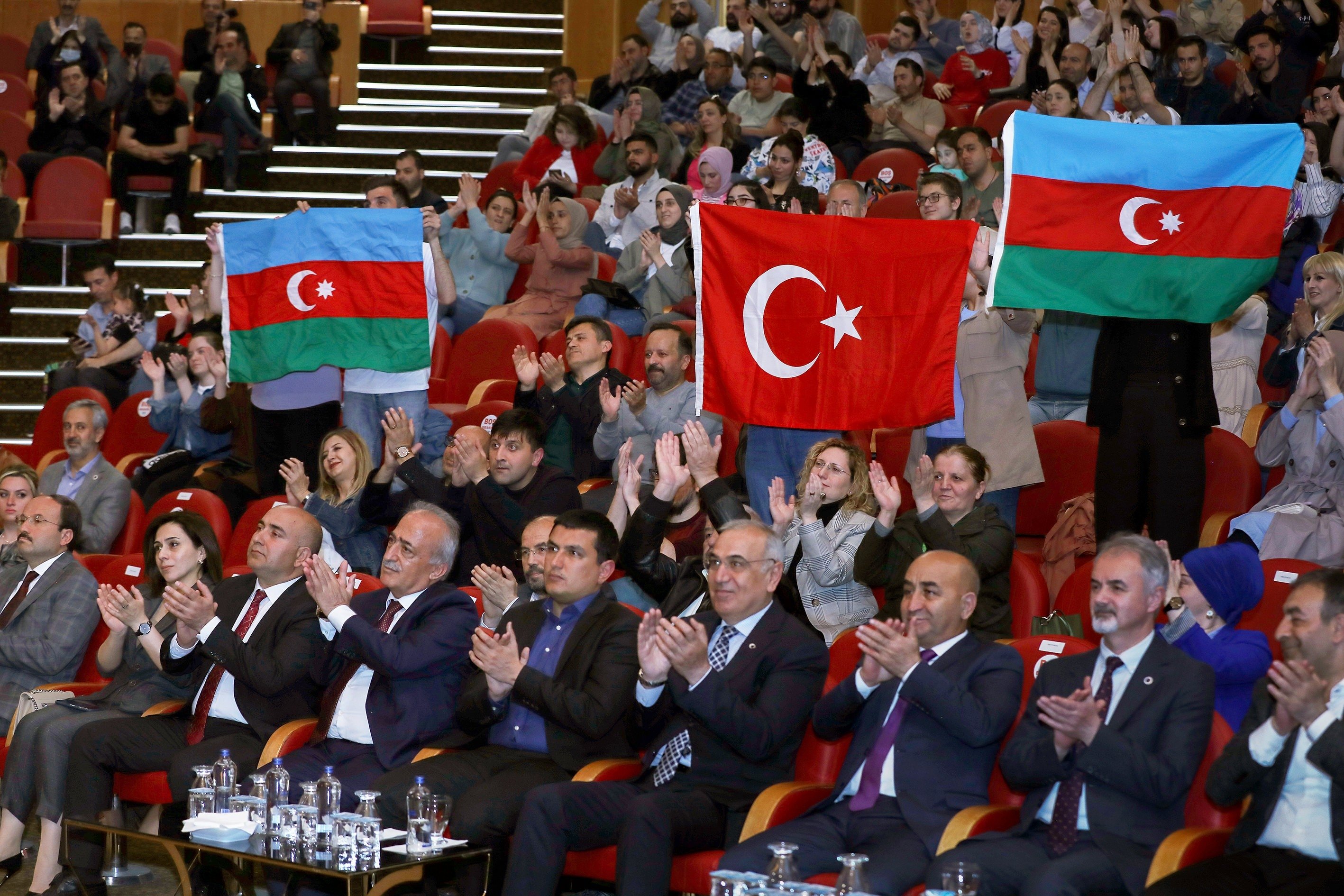 The provision regarding the opening of the Zangezur corridor, one of the main provisions of the Tripartite Declaration signed on Nov. 10, 2020, between the presidents of Azerbaijan and Russia and Armenia’s prime minister, is a “great political achievement, a historic victory, “Azerbaijan’s ambassador to Turkey told Anadolu Agency (AA) in an exclusive interview.

“I can say that the Zangezur corridor will create new transport opportunities not only for Azerbaijan but also for the whole region. This corridor will provide the shortest road link between China and Europe and will promote closer integration between Europe and Asia,” said Rashad Mammadov , adding the realization of the corridor will ensure the establishment of direct land connections of the main part of Azerbaijan with both the Nakhchivan Autonomous Republic and Turkey.

Azerbaijan’s President Ilham Aliyev on May 23 said that Baku agreed with Yerevan on the opening of the Zangezur corridor, including the construction of both railways and highways.

“As President Ilham Aliyev said, the Zangezur corridor is already a reality. The whole world has accepted this,” Mammadov said.

“Although Armenia has long tried to prevent the construction of this corridor under various pretexts, there is already progress in this direction. During the meeting between the president of Azerbaijan and the prime minister of Armenia in Brussels a few days ago, it was agreed, among other issues, to open the Zangezur corridor, including the construction of both roads and railways,” he stressed.

Mammadov emphasized his country believes the soonest implementation of the project will also contribute to “lasting peace and development in the region.”

He underlined that the corridor will play an “important role” in connecting East-West and North-South international transport corridors and diversifying transport lines.

“One of the most important aspects of the Zangezur corridor is that it will connect the Turkic world. Thus, the geography of the torn Turkic world will be connected with transport and logistics projects,” he added.

Mammadov also recalled that the presidents of Azerbaijan and Turkey laid the foundation of the Zangezur corridor – the Horadiz-Jabrayil-Zangilan-Agband highway – on Oct. 26 last year, noting that the construction of the 123.6-kilometer (76.8-mile) highway is underground.

Zangezur was part of Azerbaijan, but in the 1920s, the Soviets gave the region to Armenia. After this move, Azerbaijan lost its direct overland route with Nakhchivan.

Azerbaijan has focused on projects in the Zangezur corridor that will include motorways and rail lines. Baku and Moscow will also negotiate for the construction of a 43-kilometer railway in the region. Russia has railway properties in Armenia.

Following the completion of the railway, Azerbaijan will be able to reach Iran, Armenia and Nakhchivan uninterruptedly by train. The railway will also link Turkey with Russia through Azerbaijan.

Relations between the two former Soviet countries of Azerbaijan and Armenia have been tense since 1991 when the Armenian military illegally occupied Nagorno-Karabakh, a territory internationally recognized as part of Azerbaijan, and seven adjacent regions.

New clashes erupted on Sept. 27, 2020, and the 44-day conflict saw Azerbaijan liberate several cities and over 300 settlements and villages that were occupied by Armenia for almost three decades.

A tripartite agreement was brokered by Russia to bring an end to the war in November 2020. Turkey was a key backer of Azerbaijan during the 44-day war.

“After 44 days of the Patriotic War, the first task of our state was to prepare for the great return, to restore our cities and villages that were plundered and destroyed under the enemy occupation for 30 years,” Mammadov said.

The ambassador pointed out that the “great victory” has given the internally displaced compatriots a “chance to return to their native lands,” adding that this, however, also takes some time.

“During the occupation, Armenia destroyed more than 900 towns and villages. There was not a single healthy residential building or infrastructure in most of the area. Agdam, once one of the most beautiful and developed cities in the South Caucasus, has been compared to Hiroshima after the occupation. More than 150,000 houses, more than 9,000 administrative buildings and over 700 school buildings were completely destroyed in the liberated areas,” he said.

Mammadov went on to say that not only Azerbaijan’s settlements but also its historical and cultural monuments have been “destroyed and looted.”

“The most brutal victims were Islamic religious monuments. Of the 67 official mosques in Karabakh, 63 were completely destroyed and four were partially destroyed,” he said.

Mammadov said most of the liberated area is mined, and following the end of the war, lots of Azerbaijani military personnel and civilians were killed or wounded by land mines.

“Unfortunately, Armenia refuses to give mine maps to Azerbaijan, grossly violating all norms of international humanitarian law,” he said.

In order to create a “healthy and safe living environment” for the people, Mammadov said the Azerbaijani government carries out demining activities in these areas using the latest technology, where “as always, brotherly Turkey supports” the country in this task.

“Given that mines pose a serious risk to the population, demining activities are carried out intensively in parallel with rehabilitation and reconstruction work,” he said.

The envoy underlined that “important work” is being done to ensure the “great return” to the liberated territories, such as the restoration and reconstruction of cities and villages and restoration of electricity, natural gas, water and communications lines as well as the construction of roads along with the establishment of education, health, culture, housing and communal services, and the construction of houses and other necessary infrastructure work.

Currently, “huge infrastructure projects” are being implemented and the necessary measures are being taken to ensure the “comfortable settlement” of people in those areas, he said, adding plans are in the works for three airports to operate in the region, including Fuzuli airport, constructed last year, Zangilan airport, which is under construction and scheduled to open this year, and Lachin airport set to be constructed in 2024.

“Taking into account that the energy factor plays a decisive role in the restoration and development of the territories, work is underway to apply green technologies and smart systems in the region. It is planned to turn the Karabakh region into a green energy zone,” he said.

Mammadov said the return of the first internally displaced persons (IDPs) is expected to begin in Zangilan, where one of the main projects in the region – a smart village – is set to be implemented with the cooperation of Turkish companies.

“We hope that the work done to restore the region will be completed soon and our compatriots who have been displaced for more than 30 years will return to their lands,” he said.

The roots of relations between Azerbaijan and Turkey – “the children of the same father” -– run deep in history with a common language, religion, culture and other interconnectedness that bring people closer to each other, the ambassador said.

“There are no other countries in the world as close as Azerbaijan and Turkey, which always support each other unconditionally,” he added.

Recalling that Turkey was the first country to recognize Azerbaijan’s independence reestablished in 1991, Mammadov said diplomatic relations were established between the two states on Jan. 14, 1992, which marked its 30th anniversary this year.

“Relations between Azerbaijan and Turkey are currently at the highest stage of development. These relations are based on the mutual respect and love of both states and peoples,” he said.

Mammadov also hailed Turkey’s moral and political support of Azerbaijan in the 44-day Patriotic War, which helped Azerbaijan’s voice to be heard on all international platforms, which “once again demonstrated the unshakable brotherhood to the world.”

He highlighted that the Shusha Declaration signed between the two countries on June 15, 2021, in the city of Shusha, the cultural capital of Azerbaijan, raised these relations to the “level of an alliance.”

The Shusha Declaration focuses on defense cooperation and establishing new transportation routes, affirming the two armies’ joint efforts in the face of foreign threats, and the restructuring and modernization of their armed forces.

“Turkish companies are currently closely involved with Azerbaijani companies in the reconstruction of the liberated Karabakh region,” he said.

“In general, Azerbaijani-Turkish relations, established on the basis of the far-sighted policy of our heads of state, create new opportunities not only for these two countries but for the entire region and play a special role in prosperity, development, long -term peace and stability in the region,” he concluded.